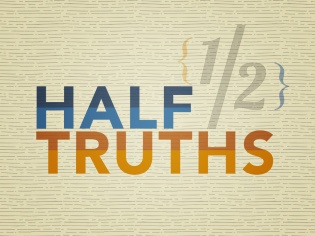 I have been intending to post this sermon for most of the week but life kept getting in the way. This is the first in a five week series of sermons inspired by Half Truths by Rev. Adam Hamilton. During this series at Shiloh, we are taking a look at a “Christian cliche” which sounds biblical but really is not. That is not to say that some of these don’t have at least some element of truth but sometimes these sayings are (1) not biblical and (2) can cause great harm. This one in particular hits home for me so I was glad to do it first. This coming Sunday we are looking at “God Helps Those who Help Themselves.” I will try to post it sooner! I hope you receive a blessing from this sermon. Please feel free to leave any feedback you would like to – Jonathan

GENESIS 50:20 (NLT) – You intended to harm me, but God intended it all for good. He brought me to this position so I could save the lives of many people.

ROMANS 8:28 (NLT) – And we know that God causes everything to work together[m] for the good of those who love God and are called according to his purpose for them.

Most of you know about my daughter’s death soon after she was born. Among the many things I remember about that day was the outpouring of love and the many text messages and phone calls I got. Most I honestly don’t remember much about but I do remember a couple that stood out because of what they said. The gist of what these messages said was “so sorry to hear of what happened. It must have been God’s will. There must have been some reason why she died. It’s all part of God’s plan.

Let me stop right here for a moment and ask you to do me a favor: Please, never say anything like those statements to anyone who is in the midst of tragedy. Often these words are meant well and the person saying them is simply trying to provide some kind of reminder of God being present. But to me, these words provide no comfort and can do great harm to one’s soul. And not to mention, do we really want to paint God as a celestial bully who would willfully take someone’s child from them or give someone cancer? If we understand that God’s very nature and ways are only of love then we simply can not think that these things are true. Here’s the spoiler for today’s message: God is not in the business of willfully causing pain in order to prove a point or to make some kind of chain of events occur. Simply, bad things just happen. But this is not to say that God can’t or doesn’t redeem that bad thing for a good purpose.

When we use the logic that everything that happens is because God orchestrated it or that he has some purpose, we can then make an argument that everything is God’s will. If a marriage ends in divorce because one of the spouses committed adultery, did that happen because God intended for the marriage to end before it even began? When someone makes the decision to shoot elementary school students, does this mean those kids had to die by the actions of the shooter as part of a grant celestial plan that God came up with? We can even go down the line and say that God willed it for Mississippi State to lose to Ole Miss in football yet again and for UK to not make the Final Four last year.

When we say that everything happens for a reason or we make claims that something happening was simply God’s will, we are essentially passing the buck on any sort of personal responsibility that we have for our actions. Take the above events: If we simply chalk them up to just being God’s will or he having a divine purpose for making these things happen, that means we have no responsibility. That means that the spouse who cheated didn’t actually do anything wrong because they were just acting according to God’s will. This means that the shooter was merely an instrument of God used to continue his plan. This means that Mississippi State and UK have no responsibility for their not playing well enough to win the games I mentioned because God simply did not intend for them to win.

In our scriptures for today we have one from the old testament and one from the new testament which might seem like a night and day difference. These scriptures are sometimes used by people who defend that God has everything planned in advance and that we are all just players in his great drama. The reading out of Genesis 50 of toward the end of the story of Joseph. Perhaps you know the story. Joseph was beloved by his father. His brothers were jealous so they sold him into slavery to the Egyptians In spite of his being a slave he became a trusted advisor of the pharaoh and helped the Egyptians avoid the consequences of a famine which was revealed to Joseph in a dream. Joseph eventually ends up helping his brothers who sold him into slavery and they were reconciled. Hearing all of this, I can see where it would be easy to conclude that Joseph was trapped in a hole in the ground and sold to the Egyptians in order to prevent them and their neighbors from going hungry. There is a strong case to be made for this innocent man being sold into slavery being part of God’s plan. Which brings us to the new testament reading.

Paul wrote Romans when he was on his way to being put on trial in from of the emperor. Paul was no stranger to conflict, in fact his ministry is marked with it time and time again. So Paul is in the midst of one of these conflicts and pens this letter in which he states that God works all things out for the good of Himself and his people. This is another scripture in which people sometimes try to defend the notion that God has somehow planned everything. But note what Paul did not say: He did say that God has arranged everything according to his will. He did not say that God has caused him to be taken into chains and put on trial to face death. He did not say that God made him go to prison. Paul, instead, says that God works it all out in the end. This is an important difference to take note of because Paul is not placing the blame on God for his being under arrest, rather he is acknowledging that God will use it. To say it another way, God doesn’t cause innocent people to go to jail, he doesn’t cause people to die of cancer, and he does not cause people to be killed in senseless tragedies. But when these things do happen, he make the evil thing bring about good for the Kingdom of God.

Part of the reason so many of us have this notion of God is because of a theologian named John Calvin. Calvin was very much against the theology of the Catholic church and the argument could be made that almost everything they were for, he was against. His understanding of protestant theology was outlined in what is considered to be one of the classics of Christians theology called The Institutes of Christian Religion. Calvin was a proponent of a outlook called theological determinism. In a nutshell, Calvin believed that God is sovereign and has dominion over everything in the world, including everything that happens right down to the cells in our body replicating. Calvin’s argument was that if something occurred that was not God’s will then God could not be sovereign and have dominion. Calvin also believed in a principle called predestination, which meant that not only did God know everything that would happen in history but that he actually planned everything. Further, Calvin stated that this included God not knowing but actually choosing who would and would not be saved in in his presence forever. In other words, Calvin felt that God planned every single thing that would ever happen, including the fact that you’re here today at Shiloh and that God has even chosen who will and will not be forgiven of their sins. Calvin’s view is that God has picked and chosen who will go to Heaven and who will go to Hell.

John Wesley, the founder of Methodism, had similar beliefs to Calvin in several areas. He even made a statement which said, in essence that Methodism was within a breath of Calvinism. However, Wesley disagreed with Calvin in one major area: Predestination. Wesley believed that from the very beginning humankind was given free will, or the ability to make our own choices. Wesley believed that God knows how we will decide but that he does not actually cause us to make certain decisions. While Calvin believed that a person could not choose to trust God – rather that God would in a sense force them to believe through what he called irresistible grace – Methodist belief is that we decide for ourselves to trust Christ. Instead of irresistible grace, Wesley believed that God gives us prevenient grace, or grace which comes before which God uses to reach out to us humans and enable us to say yes to his justifying and sanctifying grace. Wesley believed that we have free will instead of having our will dictated to us.

The Bible lends support to this notion from the very beginning. In Genesis we read that God made the universe, the world, and everything in it and when he had placed Adam and Eve in the garden he gave them dominion over it. This does not sound like a micromanaging, puppet string pulling God to me. Instead it sounds like that God’s intention was to be present but not to interfere in the day to day stuff. God certainly did not intend for Adam and Eve to disobey him. Why would God compel people to disobey him? The logic simply does not stand up to the test. Simply put, God is not in the business of micromanagement and he certainly is not a puppet master. God also does not cause bad things to happen.

We want to believe that everything happens for a reason, that especially when bad things happen it’s all for a greater purpose. This simply just is not true. Bad things happen for a variety of reasons but sometimes they just happen. But they do not happen because God willed it or because he wanted to prove a point. God does not give people cancer. God does not cause children to die. God does not cause any sort of tragedy. But when tragedy does strike, let us remember that God is in the midst of it and he is ready to take that evil, ugly thing and make something beautiful come out of it. In the name of the Father, Son, and Holy Spirt – amen.

2 thoughts on “Sermon: Half Truths – “Everything Happens for a Reason””