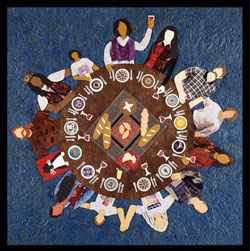 This Sunday, as many other congregations do on the first Sunday of the month, I will preside over Holy Communion at Shiloh. There are a lot of things I really enjoy about being a pastor but Eucharist near the top of the list. I count as a huge blessing to be able to present the body and blood of Christ to all who have gathered to worship as a way to proclaim the risen Christ and to draw us closer to him. We also have a common sacrament that unites us not only with one another but with the entire worldwide church. Holy Communion is a beautiful expression of our faith.

Just prior to inviting all to receive the elements, I give a reminder that the table does not belong to us as a congregation or as a denomination. It’s not called “Christ’s table” just as a pretty catchphrase; the table truly belongs to him. As Christ invited all to commune with him during his days here, so we invite all to his table. I remind everyone that one does not have to be a member of Shiloh, another congregation within the UMC or a congregation anywhere else for that matter. The only qualification is a desire to have an encounter with Jesus or even to not be sure why one wants to come to the table. The point us, we are not to put up barriers to the table when it does not belong to us.

“The Church used to be a lifeboat rescuing the perishing. Now she is a cruise ship recruiting the promising.”

The above quote is by Leonard Ravenhill and was shared by a friend on Facebook. He and I both shared some thoughts about the church’s intent was to be open to all. So many people have had experiences that made them feel anything but accepted in churches and I am deeply grieved by this. How did the church get to the point where “all are welcome” meant “all are welcome as long as they meet our standards?”

Unfortunately we have all seen churches that tend to only want certain people as part of their congregation. I know of a church which was seeking to grow and decided to do some marketing in the form of direct mailings, signs near the main roads, things like that. My friend who was part of the church at the time was on the team who was in charge of this marketing campaign and became disillusioned when he realized that the mailings were being sent only to certain ZIP codes and the signs being put up in certain neighborhoods. When his concerns were not resolved within the committee, my friend went to talk to the pastor. Much to his (and my) shock, the pastor said “we have to make sure we get the right people into this church.” My friend is no longer part of the church and I really can’t blame him.

When Jesus came as a man and was ministering in this world, he put no restrictions on who could come to him. His apostles were not made up of the richest or the “most worthy” people in the land. His very inner circle was made up of what the society of the day considered some of the lowest people. These would have been the blue collar guys living in the poor ZIP codes, they were not wealthy nor did they hold any kind of real power. Jesus himself was a carpenter by trade and was not some well-to-do guy living in the best neighborhood. When people sought him out, he didn’t care where they lived. They only had to come as they were, find healing for their lives, bodies, souls, and experience transformation. He hindered no one.

Why is the church hindering people today?

Churches have expressed a desire to grow and ended up closing because the people they attracted were not just like those already there so the new people were driven out. I find this to be among the saddest reasons for a house of worship to close its doors. May God forgive our exclusionary practices and give all his people welcoming hearts which truly extends to all people. No one should be hindered from Jesus and therefore should not be hindered from worshiping him. Who are we to decide who’s worthy and who isn’t?

If you think about it, none of us are.

One thought on “All Are Welcome”