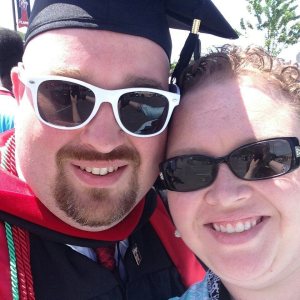 Today, after many years of putting it off for no good reason, I finally achieved something that has been a dream of mine since I was a teenager. Today, I became a college graduate.

I won’t sugar coat it: This was hard. Completing a degree online may sound like something simple but it was tough. Like classroom students, I had to read, take tests and write papers. I had to really think about what I was learning and discern whether what I was learning matched up with God’s Word (more often than not, the answer was “yes”). While in class discussions, I had acknowledge what I found issues with and discuss it in grace-filled ways when all I really wanted to do is ask the poster of the thread, “Are you crazy?!” But somehow I managed to do it. All of that while working what amounts to a full time job and a half, serving a church, being married and while enduring the loss of our Hannah. And I managed to graduate Cum Laude.

I find this very fitting that graduation happened on the weekend of Mother’s Day. Graduating from college was not only a dream of mine, it was also a dream of my mom’s. When I was younger, I was very sick. For the first several years of my life, I was in an out of hospitals, poked and prodded by specialists, was the subject of experimental drugs and other things that I don’t remember and probably don’t care to. In the midst of all of this, I wasn’t able to attend school like the rest of the kids. There were many in the local school’s administration who felt that I would be a burden, that I wasn’t capable of learning and that they shouldn’t waste their time on me because I was probably going to die anyway (at the time, there was doubt as to whether I would live). This was before we had many of the laws governing special educations that we have today. With little backing, Mom had to fight tooth and nail to get the school district to provide the services I needed in order to learn. Because of her work, I, alone with several kids since me, benefited by being able to be taught in homebound programs. Eventually I was able to begin attending school regularly and ultimately I graduated from high school with honors.

Not bad for a kid who was incapable of learning and on the brink of death.

Mom would have been very proud. I remember after my high school graduation I went up to her and she said to me, “you did it. You proved them wrong.” She was just as proud when I graduated with my two Associate of Arts degrees. I can only imagine how she would have acted today but I imagine she would have been pleased.

I don’t say anything of this to brag. I am proud of my accomplishments but this is about more than bragging. The moral of this story is this: Do not ever let someone tell you that you can’t achieve your goals. Be persistent. Don’t be afraid of hard work. Focus on God and what He wants to do through you. No matter what your calling is, God will equip you to fulfill it. The question is, will you see it through or will you give in to attacks from the enemy?

Next stop: Asbury Theological Seminary. And then: On to ordination. I’ve come this far; I will see this through.

I'm a UMC pastor in Mississippi. I'm married to woman certified to teach physics (in other words, she's much smarter than me!) and we have a daughter who is with the Lord. I love talking about Jesus and making much of Him, sports, ministries of justice and mercy, whatever else comes to mind. I'm kind of like a box of chocolates: You never know what you're gonna get. View all posts by Rev. Jonathan Tullos